This guide is for the install of the Longhorn Engineer Atari 2600 Video mod for the Sears Arcade II. 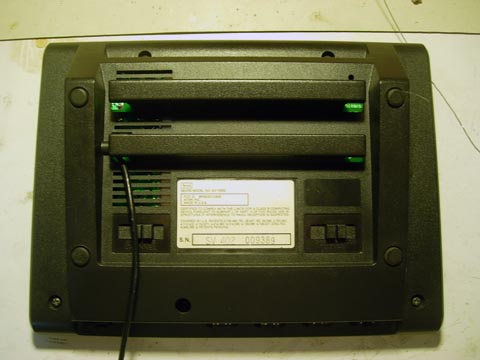 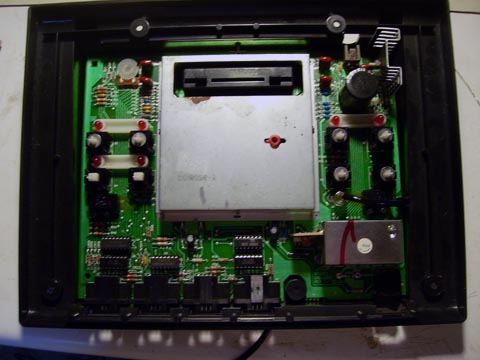 Take the cover off. On the push switches there are some washers. Make sure to take those off so you don’t loose them later. 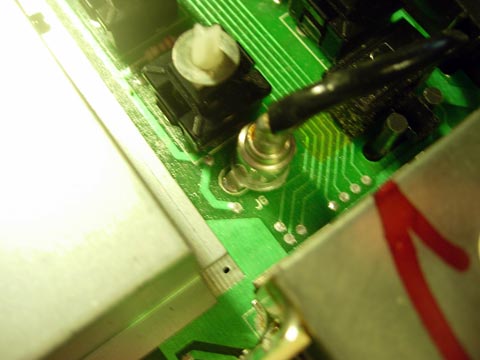 Remove the RF cable from its socket by pulling it straight out of its socket. 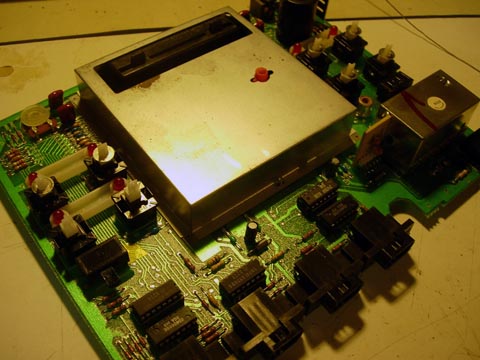 Pick the Atari mainboard out of the case. Remove the RF cable from the case by pulling it through the back. 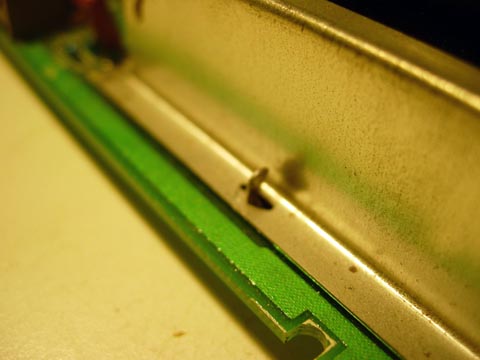 The Shielding around the Cartridge Slot area needs to be removed before we proceed. Using your pliers grab these tabs that are around the shielding and twist. 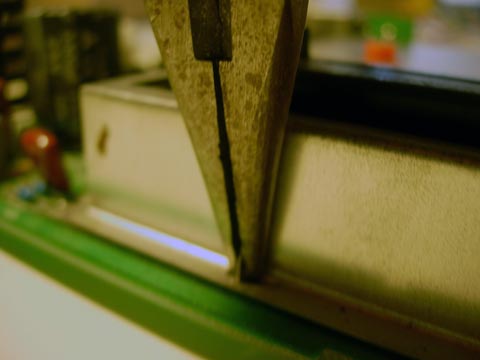 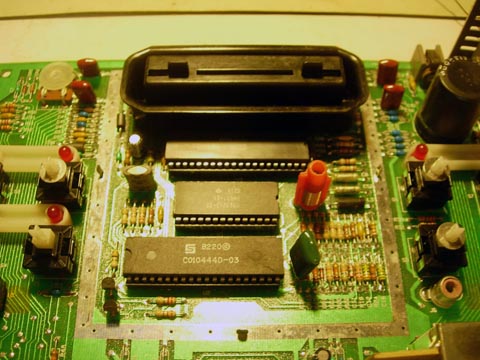 The top of the shielding should pop off. 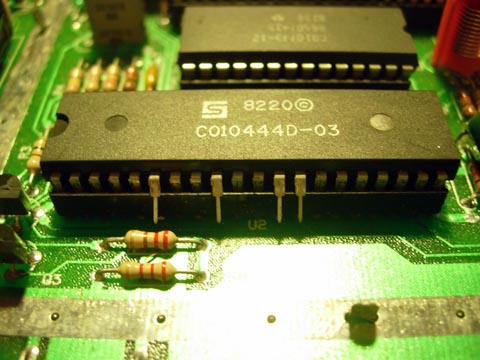 There are three chips under this shielding the most bottom one needs to be removed. Take a flat headed screw driver and pry one end a bit and then pry the other side. Do this till the entire chip comes out. Then bend the 6th, 9th, 12th, and 13th pin outwards. Replace the chip in its socket. It should look like the above when finished. 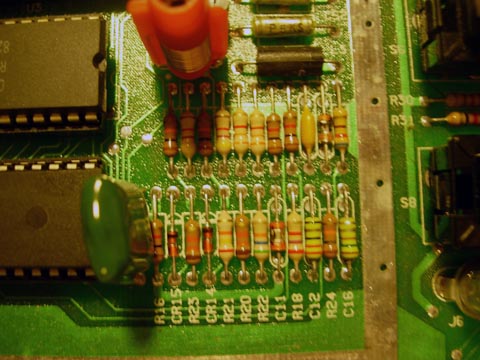 To the right of the TIA chip there are some resistors.

Six of the wires on the left side of the Video Mod Board need to be soldered to the spots as indicated above. 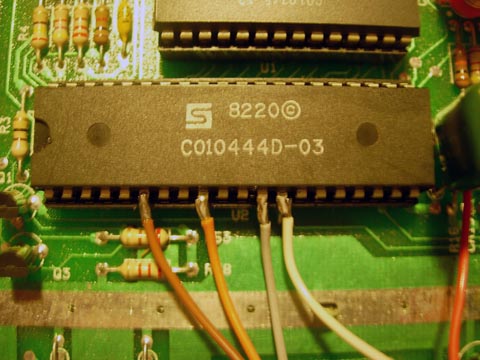 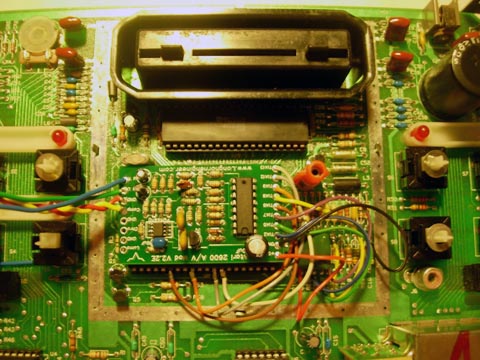 Remove the backing to the foam on the backside of the Video Mod Board and stick the mod on the small middle chip. 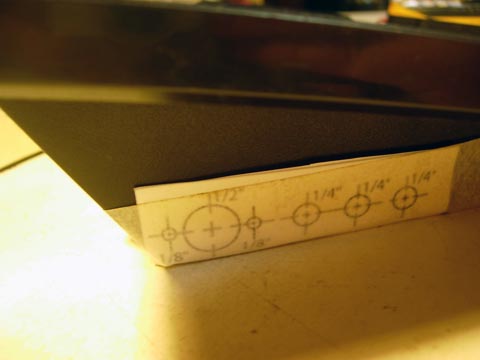 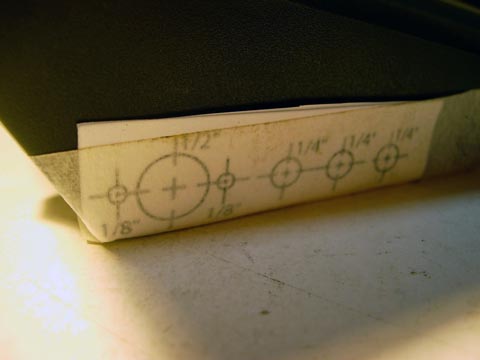 Cut out the drill template on the sheet that is supplied. Tape it to the left side of the bottom of the case as shown. Drill all the holes with a 1/16″ bit first. Then use the 1/2″ and 1/4″ forstner bits to drill the other 4 holes. Last, drill the 1/8″ holes. 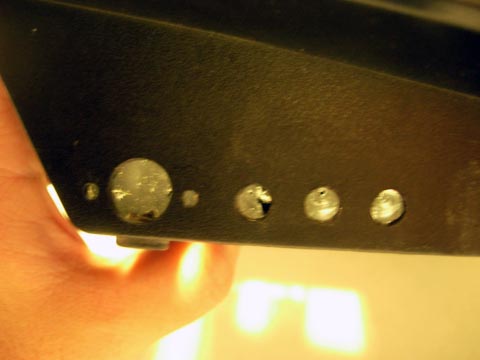 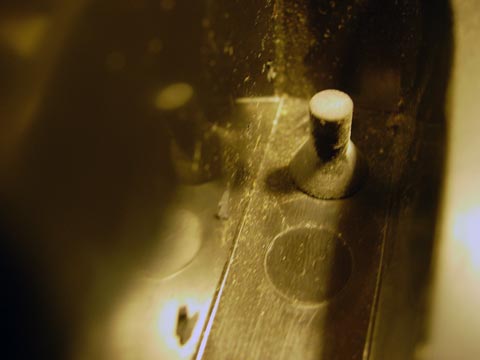 Cut off the top of this rubber stub on the inside near the holes that where drilled. 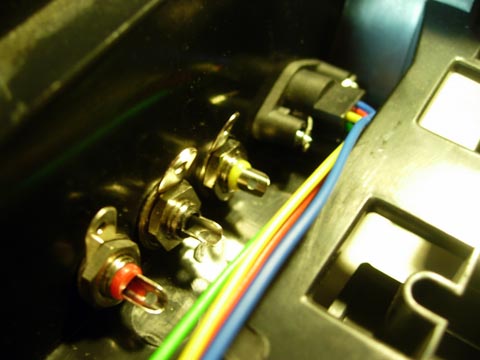 Install the S-video jack and RCA jacks. The RCA jacks have four parts; the jack, a nut, a washer, and a grounding ring. Remove the nut and slide the grounding ring and washer off. Slide the RCA jack through the 1/4″ hole and place the grounding ring then the washer and then the nut on it. Looking from the back the colors go (left from right) yellow, white, red. Tighten the nuts with a 9mm wrench or needle nose pliers. 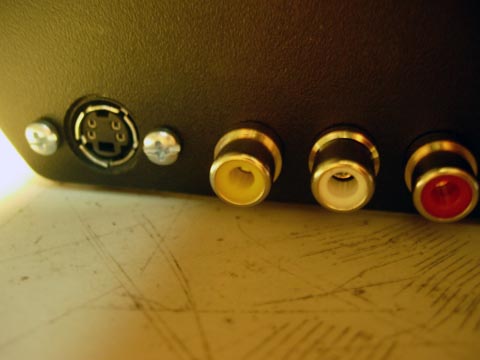 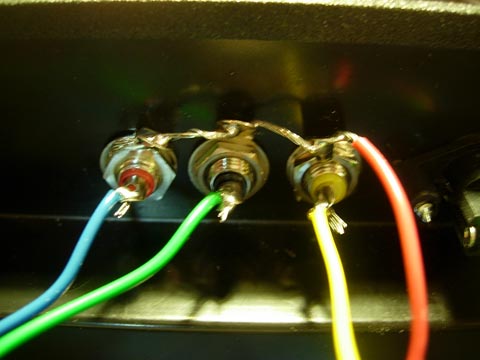 Solder the 4 long 10″ wires to the RCA jacks like above. The red wire goes through all the ground rings. 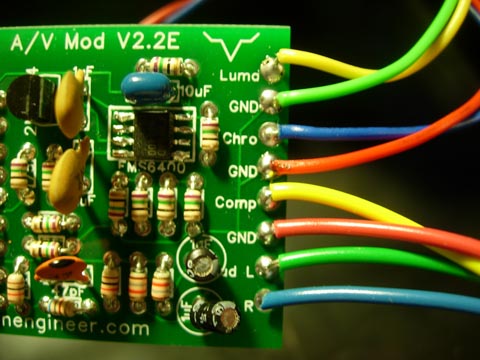 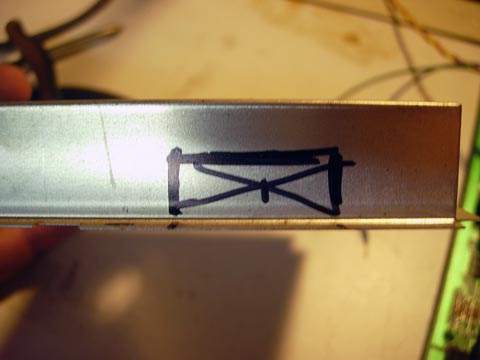 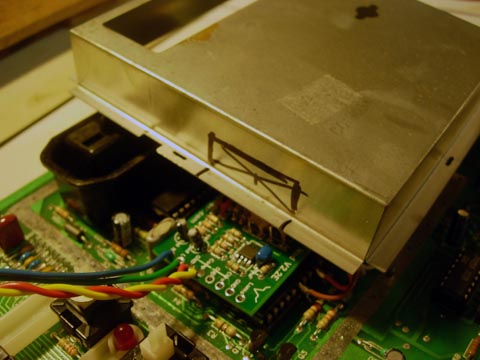 Cut a rectangle out of the shielding so the shielding can be replaced. This could improve your picture quality. But it is not necessary. You will need tin snips or a rotary device like a dremel. After cutting put the RF shielding back on the Atari. 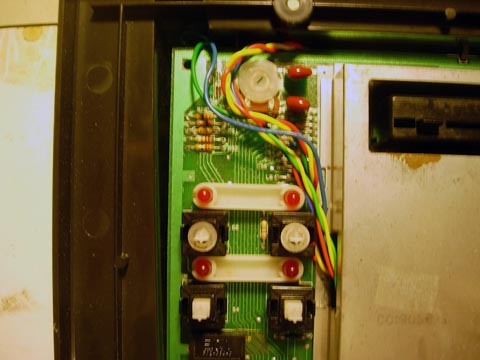 Now place the Atari mainboard in the bottom half of the case. There are two switches on the bottom of the case that go through the mainboard. Make sure to line those up correctly. Rout the wires the best way possible. Replace the washers on the push switches. Lastly, replace the cover and the screws.